The Highway by C. J. Box

Big Sky is an American crime drama thriller television series created by David E. Kelley. It's based on the C. J. Box book The Highway. The series was premiered on ABC as a fall entry in the 2020–21 television season on November 17, 2020.

Private detectives Cassie Dewell and Cody Hoyt join forces with his estranged wife, ex-cop Jenny Hoyt, to search for two sisters who have been kidnapped by a truck driver on a remote highway in Montana. But when they discover that these are not the only girls who have disappeared in the area, they must race against the clock to stop the killer before another woman is taken.

The series, based on C. J. Box's novel The Highway and developed by David E. Kelley, was announced as The Big Sky in January 2020 and given a straight-to-series order by ABC. The series is produced by David E. Kelley Productions, A+E Studios and 20th Television. Kelley and Ross Fineman will serve as executive producers, along with Box, Matthew Gross and Paul McGuigan. On June 17, 2020, it was announced that the series would air on Tuesdays at 10:00/9:00c. On September 17, 2020, it was announced that the series set to premiere on November 17, 2020. On December 7, 2020, ABC gave the series a six-episode back order, making the total number of episodes ordered to 16. On May 4, 2021, ABC renewed the series for a second season. It was also reported that Elwood Reid who was added as an executive producer for the second half of the first season took the second season from Kelley. However, Kelley is still involved with the series and remains as an executive producer. On May 13, 2022, ABC renewed the series for a third season.

Filming on the series' first season began on August 27, 2020, and is scheduled to conclude on January 13, 2021, in Pitt Meadows, British Columbia. Filming was originally set to take place in Albuquerque, New Mexico and Las Vegas, Nevada, but the series was moved to Vancouver in July 2020, due to the COVID-19 pandemic. The series was one of many American television productions in Vancouver that briefly halted filming in late September 2020, due to delays in receiving cast and crew COVID-19 test results.

On September 9, 2020, ABC released the first teaser for the series.

The second season premiered on September 30, 2021 on ABC.

For the series, review aggregator Rotten Tomatoes reported an approval rating of 62% based on 21 critical reviews, with an average rating of 6.76/10. The website's critics consensus reads, "Big Sky's shaky setup doesn't do it many favors, but viewers who can push through may find its fast-paced, twisty mystery compelling enough." Metacritic gave the series a weighted average score of 58 out of 100 based on 16 critical reviews, indicating "mixed or average reviews".

Based on average total viewers per episode of Big Sky on ABC:

After the pilot aired, members of the Rocky Mountain Tribal Leaders Council, Coushatta Tribe of Louisiana, Global Indigenous Council, Great Plains Tribal Chairmen's Association, and the Union of British Columbia Indian Chiefs (UBCIC), among others, addressed a letter to ABC Entertainment President Karey Burke and series creator David E. Kelley, "accusing the show of “at best, cultural insensitivity, and at worst, appropriation” due to being set in area with a disproportionately high rate of Murdered and Missing Indigenous Women & Girls (MMIWG), yet not having any tribal representation in the show." 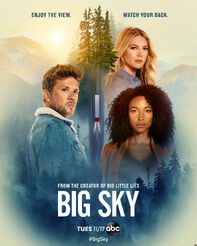 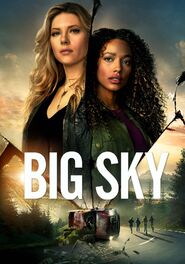