Blake was arrested and was being held at Lochsa County Jail. He used his phone call to call a lawyer, ignoring his father's request to talk. Horst then arrived at the jail to visit Blake and had Blake brought out to him. He gave Blake a handful of dirt from the ranch, saying it was the only piece of the ranch he'd ever get. After this conversation, Blake used a smuggled cell phone to call Jenny, an ex of his, and ask for her help.[1]

Jenny and Cassie traveled to Lochsa County to see Blake in jail and talk to him. He was adamant that he did not assault Rosie. He said he was trying to help her by letting her into the caretaker's cabin on his father's property after her father was fired and they were both locked out. He fell and hit his head and when he woke up, he was in a hotel room and got told that he attacked Rosie. Later, Horst got Blake released from jail and picked him up outside.[2]

Back at the ranch, Blake reunited with his siblings. Cheyenne was resentful that he'd left, but told him she didn't believe he'd assaulted Rosie. Blake told Cheyenne she should leave herself, even without a place to go. If she didn't go soon, she never would. Then the family gathered for breakfast, where Horst announced that John Wayne would intermit the ranch as Blake had violated the moral turpitude clause of the ranch covenant. Blake said that was fine as he didn't want the ranch anyway.

After breakfast, Horst and Blake went for a ride. Horst said he would see Blake through the case with Rosie before dying. Blake said he was innocent, but Horst refused to accept that. Blake then told Horst he left in the first place because of Cole Danvers. He couldn't put it in a box and forget about it like Horst told him to.

When Jenny updated him on the case, he expressed regret that he'd gotten her involved and tried to get to her promise to leave.

Blake took the gator out and told John Wayne he was doing something he should have done years prior. He went and dug a hole on his family's property. From the hole, he pulled out a belt buckle that said Cole Danvers. He told John Wayne that Cole Danvers was a farm hand Rand had killed as a child because Cole made fun of him. Horst had forced Blake to help bury Cole and cover it up. When Blake said he was finally going to tell the truth, John Wayne swung a shovel at him and hit him back into the hole he'd dug.[3]

John Wayne quickly fled in horror, but Cheyenne, who had been watching from nearby, checked on Blake and upon find him dead, moved his body. His death was later ruled a suicide at Horst's urging.[4] 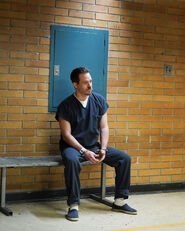 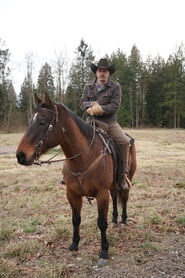 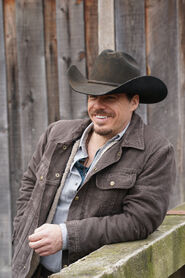 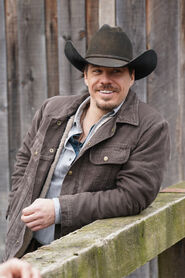