While her brother Blake sat in jail, accused of assaulting Rosie Amaya, Cheyenne and her family had a game night, mandated by their father. When Rand tried to leave during the game, Horst threatened him with a gun and fired it to prove it was loaded.

Cheyenne later went to a bar, where she met Cassie, whom she knew to be a private investigator looking into what happened with Blake and Rosie. She told Cassie that they hadn't seen Blake in years and then he came back to town with all these ideas for the ranch because Horst was dying. She warned Cassie that her brothers wouldn't appreciate them poking around.[1]

When Blake returned to the ranch, Cheyenne told him she didn't believe he had assaulted Rosie, but she was still mad at him for leaving, though she admitted she would have left herself if she had any place to go. Blake told her she didn't need to have a place to go. She just needed to leave. She also warned Blake that a lot had changed at the ranch. John Wayne had Rand digging holes all over the ranch and there was talk of mineral rights. She also revealed that she knew John Wayne and Rand had been at the cabin the night Rosie was assaulted, but neither John Wayne nor Rand would admit to it.

At family breakfast that morning, Horst announced that John Wayne would inherit the ranch, as Blake had violated the moral turpitude clause of the ranch covenant. Blake said that was fine as he didn't want the ranch anyway.

After this conversation, Cheyenne talked to Margaret, asking why she let Horst speak to her the way he did, so disrespectfully. Margaret told Cheyenne she should leave as there was nothing left for her at the ranch, but Cheyenne said she wasn't going to sit by like Margaret had and encouraged Margaret to fight for what she needed.

That evening, Cheyenne spied on Blake and John Wayne as the two of them had a conversation over what she didn't know was the hole where Blake and Horst had buried a ranch hand named Cole Danvers whom Rand had killed as a child. Cheyenne watched in horror when John Wayne hit Blake with a shovel when Blake refused to keep covering for Rand.[2]

After John Wayne fled, Cheyenne went to check on Blake and found him dead. She took Cole's belt buckle and then started dragging Blake's body away. Later, she looked up Cole Danvers and found the missing persons report. When Blake's body was discovered later, where Cheyenne staged it below a cliff where Blake used to sit and drink, Cheyenne quietly told John Wayne he could thank her later, letting him know she'd been the one to move the body.

While Cheyenne was talking to her mother, sharing a memory of Blake, John Wayne interrupted and asked to speak to Cheyenne privately. Outside, Cheyenne told John Wayne she knew what he'd done to Blake and would tell everyone if he didn't start listening to her.

Cheyenne then met with Jenny, who told Cheyenne that Blake didn't hurt Rosie, that it was John Wayne and Rand. In exchange, Cheyenne gave Jenny the name Cold Danvers, with no other information. When John Wayne tried to confront Cheyenne about talking to Jenny, he found he couldn't kill her, though he tried.[3]

Cheyenne confronted Wagy as he went to leave the Kleinsasser ranch. She asked if he was there because of John Wayne or Rand. He just told her to mind her own business, but she ominously told him she'd see him soon. Cheyenne later spoke to her mom and told her that John Wayne had killed Blake. She said she was also going to tell Horst, but Margaret wanted to tell him herself. She then told Cheyenne that the day Cheyenne was born, Margaret brought her home to find Horst sitting at the table, waiting for dinner. She'd had a hard time having Cheyenne, but still she made him meatloaf. And she poisoned his slice, but nothing happened. She thought he was too mean to die.

Before the funeral, Cheyenne confronted John Wayne and Rand and said she knew about Cole and the barrels on the back pasture. Rand threatened her with a knife, but ultimately didn't kill her. They then attended the funeral together. After the funeral, they had guests at the ranch. Margaret forced them to hang a picture she'd made of a black spirit surrounding their house. Once it was up, Horst forced everyone else to leave and called a family meeting. He told the others they need to unite or lose everything. He said no one could leave until they solved their problem.[4]

When Horst, John Wayne, and Rand went out after the funeral to investigate a report of someone on the back pasture, Cheyenne talked to her mother, who said there was a dark shadow over their house that got bigger every day. Cheyenne told her mother her plant to take over things, but Margaret was worried they'd kill Cheyenne. Cheyenne said they couldn't do that if she killed them first. When they learned Horst and John Wayne were keeping Gil and Jenny hostage on the ranch, Cheyenne tried to recruit her mother to help her turn the men on each other to clear the way for them to take over.

Horst brought Jenny back to the house, forcing her to join them. Cheyenne tried to help free Jenny, but John Wayne used his gun to take her. Cheyenne then confronted Horst, telling him he couldn't bury his sins anymore because they were piling up. In response, Horst gave Cheyenne a gun and told her if she wanted to run things, he had a job for her. Cheyenne took the gun and went to see Gil, whom they had tied up in the barn. She found herself unable to kill Gil as ordered and when Cassie and Rosie arrived, she told them she'd take them to where John Wayne was holding Jenny, their only hope of saving Jenny. They found Jenny and John Wayne just after Jenny shot John Wayne in the leg. When John Wayne saw Cheyenne, he tackled her and in the ensuing struggle, Cheyenne shot John Wayne in the abdomen, killing him. After John Wayne died, Cheyenne sent the others away, saying she wanted to stay with him for a while.[5]

Not long afterward, Cheyenne watched as Margaret killed Horst. After the was dead, she helped her mother cleaned it up and then they went for a self-care day. After all their affairs were settled, Cheyenne went to see Jenny and told him about her father dying. She also said Rosie went to the interim sheriff and amended her statement, clearing Blake's name. She told Jenny she owed her one and offered her a place to stay if she was ever in Lochsa.[6] 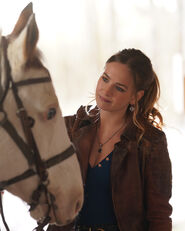 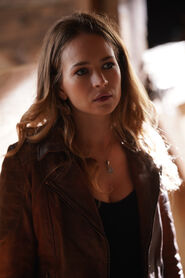