A Good Day to Die

Elena Sosa is a state trooper who worked with Rick Legarski.

Elena came to Tubb's office when she learned that one of her troopers, Rick Legarski, had nearly been killed at a Bureau of Land Management shed when Jenny, Cassie, and Tubb went there believing he was holding some missing girls there. When the girls were not found, Elena believed it was a witch hunt against Legarski and asked Tubb what he was going to do about it. Under pressure, Tubb went to arrest Jenny and Cassie, but Jenny took full responsibility, so only she arrested. After Jenny was led out, Elena told Cassie that she wouldn't stand for her guy being put in danger. Cassie ignored her.[1]

After Legarski was determined to have captured and held the three girls, Sosa helped in the search for the fisherman he'd killed for trying to help Grace when she escaped. As they prepared to star the search, Sosa pledged her support for Jenny and Cassie, believing their involvement in the investigation was paramount. She was hoping to take the attention brought in from two white girls being abducted and redirect it to help find several indigenous girls, whom she was sure were among those Legarski had taken. She said once they had a sketch, she'd distribute it to tribal law enforcement in the hopes they could help find the trucker.[2]

Sosa came to the Legarski house after Ronald made a narrow escape there. She was not happy that Jenny and Cassie had contaminated possible evidence and said it would be easier if Jenny put the badge back on.[3]

Sosa helped as they went along Erik Westergaard's paper route looking for anyone who might know anything about Erik's disappearance. They eventually zeroed in on Ronald and the Pergman house. They used a megaphone to call out to Ronald, giving him a chance to give himself up. When he didn't, they breached the door, which was booby trapped. Once inside, they began searching the house. Then Cassie found sparking boxes and they noticed that the house smelled like gasoline, so they quickly evacuated. As Jenny, the last person inside, came out, the house blew up behind her.

Sosa later helped them track down Ted Maynard's car, as they figured it was used as Ronald's escape vehicle. She and Tubb rode together in a helicopter to look for it along the road. Sosa believed he was running and the fastest way to Canada was a straight shot up the interstate. When Jenny and Cassie found the car and caught up with it, Sosa warned them to hang back as backup was still 20 minutes away. When they learned that the car was on autopilot and Maynard's dead body was in the driver's seat while Erik sat on the passenger side, still alive, Sosa said she'd read about a car driving itself while the driver was drunk. They stopped the car by getting in front of it in that case. Cassie sped up and got in front of the car. Once the car was stopped, they got Erik out and Sosa took him to call his mother.[4]

Elena came to Lochsa with Tubb when Jenny called him to investigate the crimes taking place on the Kleinsasser ranch. She helped them arrest Wagy and Gregor and allowed Cassie to put Wagy in the police car herself.[5]

She works for the Montana Highway Patrol. 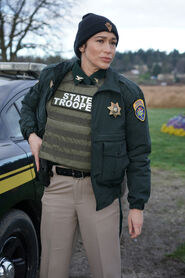 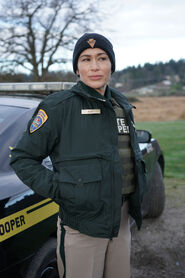