The End is Near

Let It Be Him

Erik Westergaard is a paper deliverer who was kidnapped by Ronald Pergman.

One day, Erik was riding his bike around, delivering papers, when he saw a sketch on the front page of a man who was wanted by police, Ronald Pergman. He recognized the man's face and after delivering Ronald's paper, he hid in the Pergman house bushes and took pictures of him. While he was looking at the pictures, Ronald came up behind Erik and grabbed him. He took Erik to his basement, where he put him in a cage. Erik insisted that people knew where he was and would come right to this house to look for him. Ronald bound Erik's hands and legs. When the doorbell rang, Ronald put tape over his mouth and told him to be quiet.

While Ronald was upstairs, Erik used his feet to move the cage around the room. He tried to reach Ronald's tools and eventually found Ronald's mother's body in a closet. When he saw this, he screamed, which drew Ronald and his guest's attention. Ronald came downstairs and threatened Erik to be quiet, but Ted Maynard had followed him and Ronald chased him back upstairs. He killed Maynard and then threw his body down the stairs. While he continued to wait in the basement, Erik used a metal thing in the cage to break the tape around his legs. He was then able to arm himself. When Ronald came back downstairs, he questioned Erik, saying he'd kill him if he lied. When Ronald leaned in close to the cage, Erik fired a staple gun at him several times. He also revealed that he had the taser.

Soon afterward, Ronald gleefully spread gasoline around the basement then asked Erik if had a match.[1]

Ronald fled with Erik while the police surrounded his house. He took Maynard's car and drove Erik out away from the house. Then he put Maynard's body in the front seat with Erik beside him, set the car on autopilot, and left while they drove away. Jenny and Cassie eventually caught up with the car and were able to stop it by getting in front of it and stopping. Once it was stopped, they got Erik out and Sosa took him to call his mom.

Later, Erik and his mother came to Dewell & Hoyt Private Investigations to thank Jenny and Cassie for saving him. Cassie accepted their thanks, but Jenny struggled and left abruptly. Cassie told them Jenny wasn't into taking credit and the great ones never were.[2]

He lives with his mother, Rachel. 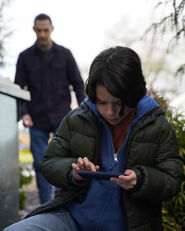