While his brother, Blake, sat in jail, accused of assaulting Rosie Amaya, John Wayne went to his parents' house to participate in a game night with the whole family, mandated by their father, Horst. When his little brother, Rand, tried to leave before the end of the game, Horst threatened him with a gun, firing it in the house to prove it was loaded. John Wayne later got caught searching his father's office. Horst told him he would get the ranch when Horst died, so he needed to start making decisions for himself and be prepared to take care of his mother, sister, and brothers, including Blake. John Wayne then told Horst about Cassie and Jenny and promised his father he'd take care of, which involved vandalizing Jenny's truck and slashing her tires.

Later, when John Wayne caught Rand doing drugs, he told Rand he needed to quit doing drugs. If Horst found out, he'd kill Rand. John Wayne then went to the bar and tried to get Cassie to have a drink with him, though she simply walked around him and left.[1]

John Wayne found Rand on the ranch hovering over Jenny, who was in a pit and holding a gun on Rand, who was taunting her with and axe. John Wayne forced Rand to stand down and then, when he learned why Jenny was at the ranch, offered to drive her to the caretaker's cabin himself. He drove Jenny to the caretaker's cabin, but while she was looking around, he left her there to find her own way back.

With Blake back home, the family all ate breakfast together. At that breakfast, Horst announced that John Wayne would inherit the ranch as Blake had violated the moral turpitude clause in the ranch covenant. He said he was having his lawyer draw up the paperwork to make sure it happened.

That night, John Wayne found Blake digging a hole on the ranch. Inside the hole was a skeleton. His name was Cole Danvers and he was a ranch hand. John Wayne had been told that Cole took a truck and left one night, but Blake said that wasn't true. What really happened was that Rand killed Cole and Horst forced Blake to help him cover it up. John Wayne wanted to bury the skeleton again, but Blake said that wouldn't erase what they'd done. This angered John Wayne, who swung his shovel at Blake, knocking him back into the hole on top of the skeleton.[2]

John Wayne was horrified by what he'd done and fled quickly, leaving Cole's skeleton and Blake behind. When he returned, he found Blake's body gone. He found the body later below a cliff where Blake liked to sit and led Horst and Rand to it, claiming he'd found the body like that and denying having seen anything. Later, while the sheriff was looking at the body, Cheyenne quietly indicated to John Wayne that she was the one who had moved the body.

John Wayne later confronted Cheyenne about it, but she made it clear to him that she knew what he'd done and would tell everyone if he didn't start listening to her.

John Wayne confronted Cheyenne again, over her talking to Jenny. He grabbed her neck, but found himself unable to kill her. He then told Rand they needed to go see Jenny.[3]

After learning about the crash at the motel, Horst asked both his sons which of them had done it. After Rand confessed, Horst ordered them to dig a grave for Blake by hand, then said after he was buried, they were going to make a plan. While they were digging, Rand admitted that he was scared, but John Wayne assured him Horst would take care of it. He also had a plan for them to run the ranch together after Horst died. Rand shared an idea to make a maze on the ranch, with traps and things designed to scare people, which disturbed John Wayne, who told him they'd talk about it later. Before the funeral, they had a confrontation with Cheyenne, who told them she knew everything. Rand threatened her with a knife, but didn't harm her in the end. At the funeral, Cheyenne told John Wayne she knew what he'd done. And afterward, they had guests at their house. Margaret forced her children to hang a picture on the wall she'd made of a black spirit over their house. When Horst saw it, he ordered everyone out and called the family together. He told them they needed to unite or lose everything. He told them no one was allowed to leave until they'd solved their problem.[4]

After the funeral, John Wayne and Rand went with their father to investigate a call about people in their back pasture. John Wayne ended up following Jenny and captured her, locking her in a box. When Horst rejoined them, they took Jenny up to the house for breakfast, but returned her to the box when she tried to escape. John Wayne wanted to kill both Jenny and Gil to cover up what was happening, but Cheyenne said they couldn't kill their way out of this. While Horst sent Cheyenne to kill Gil, he had John Wayne go to Jenny. John Wayne took Jenny out to the pasture, where they had a confrontation which led to Jenny shooting John Wayne in the leg. Cheyenne, Gil, and Jenny then arrived and John Wayne tackled Cheyenne, leading to her shooting him in the abdomen and killing him.[5] 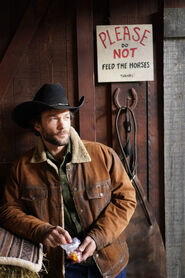 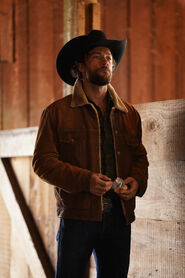 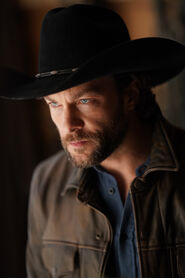 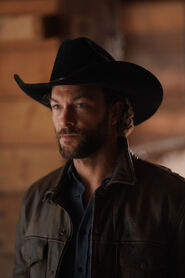