Kai Dewell is the son of Cassie Dewell.

Cassie came home late one night and went to check on Kai. She found him awake, but pretending to be asleep, with his tablet under his pillow. She took the tablet and told him to go back to sleep.[1]

The next day, after a rough day, Cassie came home and climbed into bed behind a sleeping Kai.[2]

One night, after having dinner with his mother and grandfather, he asked his mother what life was about while she was putting him to bed.[3]

Kai asked his mother if they could go camping and fishing during the upcoming full moon as she'd mentioned wanting to take him fishing.[4]

After Cody's body was discovered in his buried truck, his remains were cremated and a funeral was held. Kai attended the funeral with his mother.[5]

His mother is raising him with the help of his grandfather following the death of his father. 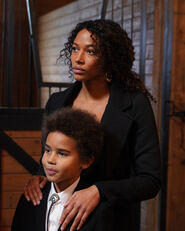