While her eldest son, Blake, sat in jail, accused of assaulting Rosie Amaya, Margaret, her husband, and her other children had a family game night, mandated by her husband, Horst. When her youngest son, Rand, tried to leave in the middle of the game, Horst threatening him with a gun, even firing it to prove it was loaded. Later that evening, while the men fought, Cheyenne found Margaret in a room and gave her a pill when she asked for it.

Later, Jenny came to the ranch and Margaret made her a cup of tea. They talked about Blake's arrest until Horst interrupted and forced Jenny to leave. After Jenny left, Margaret told Horst she couldn't stand the thought of Blake sitting in the jail, so he told her he was taking care of it.[1]

With Blake back in the house, the whole family had breakfast together. At this breakfast, Margaret visibly struggled as Horst demanded she get him coffee and then announced that John Wayne would inherit the ranch instead of Blake.

Margaret later had a conversation with Cheyenne, who was upset that Margret let Horst walk all over her and disrespect her. When Margaret tried to get Cheyenne to drop it, Cheyenne threatened to dump her pills down the drain. Margaret fought to stop Cheyenne, which delighted Cheyenne, who then encouraged Margaret to fight.[2]

When Blake died, Horst broke the news to Margaret, who sobbed and blamed Horst for his death. Later, when Horst told Wagy to rule Blake's death a suicide, Margaret objected, saying Blake didn't kill himself, to no avail. Margaret later sat with Cheyenne, who shared a memory of Blake with her mother. She used the story to encourage her mother not to cry anymore and to start fighting for herself.[3]

As she got ready for the funeral, Margaret asked Cheyenne for a pill, but Cheyenne reminded her she didn't do that anymore. Margaret then asked her what happened with Blake, because she knew that everyone knew but her. Cheyenne told her John Wayne had done it. She wanted to tell Horst as well, but Margaret said she wanted to be the one to tell him. She told Cheyenne that she had a hard time having Cheyenne, but when she came home from the hospital, Horst was still sitting at the table demanding dinner. So she made it for him and poisoned it, but he ate it and nothing happened, leading her to conclude that he was too mean to die.

Margaret then spoke to Horst, who said he blamed her completely for everything wrong with their children. In turn, she told him she was going to kill him, which he expected. They then went to the funeral together. At the funeral, she hugged John Wayne and told him she knew what he'd done. After the funeral, guests gathered at the Kleinsasser ranch. Margaret forced her children to hang a picture she'd made in front of everyone. The picture showed a black spirit over their house. When Horst saw it, he forced everyone to leave and called a family meeting, where he said they needed to unite or risk losing everything.[4]

After the funeral, the men went out to investigate a report of someone on the ranch. While they were gone, Margaret told Cheyenne that there was a dark shadow over their house that got bigger every day. Cheyenne then said she had a plan to turn the men against each other and take over the ranch. Margaret said they'd kill her, but Cheyenne said they couldn't if she killed them first.

When Rand didn't come home that night, Margaret wanted to call the police. She later went out to Rand's house, where she found him bleeding to death. She held him while he died and then said Horst did it. She went back to the house and told Horst that Rand was dead and that he was the cancer of the house. After John Wayne was also killed, Horst and Margaret stood together on the porch as Wagy arrived.[5]

They continued to watch from inside the house as Tubb arrived and Wagy and Gregor were arrested.

Soon afterward, Margaret brought Horst his meds. He took them and started struggling to breathe. She refused to give him the water she had in her hand and just told him a story about her mother telling her marrying Horst would be the mistake of her life. She didn't understand at the time, but later figured it out. She gave Horst everything she had and now she has nothing else. She just watched as Horst fell to the ground and died. Once he was dead, Cheyenne came out from where she was hiding and watching and told Margaret they needed to clean up and then they'd go have a self-care day.[6] 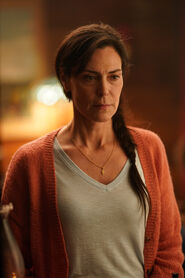 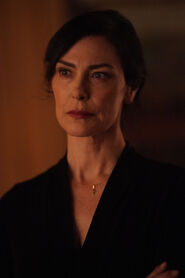