Mark Lindor is a US Marshal who came to down to help Cassie and Jenny track down Ronald.

Mark came to Montana to follow the cold trail behind Ronald Pergman. He spoke to Cassie about what he knew about the case and the many ways he was attempting to track Ronald. His plan was to wait for Ronald to slip up and return to an old pattern, revealing himself. When Cassie learned about the mysterious phone calls Jerrie was receiving at the office, she told Mark about them, though he felt they didn't mean anything. Mark then ended up helping with the case Jenny and Cassie were working when he learned Paul Calgrove, a dangerous criminal, was involved. He went with them as they discovered destroyed vials of thoroughbred horse semen, valued at over $100,000.[1]

Mark went to a junkyard with Cassie to show her a truck he'd tracked down. He was pretty sure its as Ronald, but it had been painted over and the VIN removed. However, there was still a place inside that indicated it was his and he showed Cassie inside the cab where the words, "HELP ME. -KELLI," were scratched.

Looking for any insight into Ronald, Jerrie asked her to tell him something about Ronald that wasn't in the report. She told him about the moment in the shower where he made her strip off her clothes. She felt safe with him and didn't know why. She said it felt like he was looking for something, maybe love. When she finished her story, Mark thanked her for sharing that.

Mark got a flash drive from a colleague that contained a video of Ronald coming to his mother's grave and night and spending the whole night sleeping there. In response, Mark wrote a note that said, "I'll always be with you." and left it on the grave for Ronald.[2]

After Cassie left a message on the Dewell & Hoyt answering machine that indicated she'd been kidnapped and might be in danger, Mark decided to go to Lochsa himself. Once in Lochsa, he went to the sheriff's office and explained his role and his relationship to Cassie, which he used to get her released and the charges against her dropped. Once Cassie was released, he dropped her back off at the hotel after promising to help her find Rosie.[3]

Mark called Cassie to tell her that Denise got a tip about Ronald, and she went with Mark to check it out. Once Mark and Cassie were at Dewell & Hoyt, Denise played the message she'd received from Mary Leyendecker, where she claimed to have seen Ronald. Denise believed it was genuine because of how scared Mary sounded. Cassie and Mark left to check it out. As they drove, Mark tried to make small talk, asking Cassie about her life. When she accused him of prying, he instead told her about himself, about losing his sister, who was kidnapped from a mall while he waited outside for her. A man confessed to kidnapping her, but they never found her body. Soon afterward, they arrived at Mary's house. They were unaware that Ronald was inside and Mary was already dead. When they went around the back of the house, Mark saw that one of her many dolls was on the floor, giving him the probable cause he needed to enter the house. They found a basement in the house that contained a freezer with a dead body in it. Mark called it in to the authorities.[4]

When they went back upstairs, they found the door open, meaning Ronald was there while they were and took Mary's body with him despite the extra risk. Mark then called for backup. He said Ronald would slip up again, which Cassie didn't like as it meant someone else dying. Jerrie came to Mary's house as forensic workers searched the house for evidence. She told them about Mary's sister, Scarlet, and said she didn't live far from Mary. Forensic workers found enough blood in the house to assume the wounds were fatal. He then said Mary grew up in a splinter LDS group and cut contact with everyone in her family except Scarlet. They also identified the body as Steve Lehren, who had no connection to Ronald. Mark later found out that Steve had fathered a child, Phoebe, with Scarlet, so he went to see Scarlet.

At Scarlet's house, she didn't answer the door despite her car being there. They asked a neighbor, who told them Scarlet and her daughter had left in the middle of the night with Scarlet's boyfriend. Mark showed him a picture of Ronald and he confirmed that he was the boyfriend.[5]

Jerrie continuously tried calling Scarlet. When the call finally went through and she answered, Mark told her her sister was married and probably in danger. Scarlet hung up on them. When they got a signal again on her phone, Mark left to go find her, but refused to let Jerrie go with him. As he drove, Jerrie directed him toward the signal. Jerrie then realized they seemed to be heading back into town, possibly toward Mary's house. He went to the house and quietly waited outside. When Jerrie arrived, he tried to get her to leave, but ultimately let her go inside with him.[6]

Mark and Jerrie entered and found Ronald holding Scarlet as if she were a hostage. They then rescued Scarlet and arrested Ronald. Mark then drove Ronald back to jail. On the way, Ronald said he'd need to see a doctor as Scarlet had bitten him. He also asked for Jenny and Cassie to be present at his interrogation, promising his help if they came. Mark later told Cassie and Jenny that Ronald had confessed to killing the man in the basement.

Mark, Jenny, and Cassie then spoke to Scarlet, who told them her sister had introduced to Ronald and she had no idea who he really was. She spoke of being scared because she'd left her daughter alone with Ronald. When she became distressed, they told her to go home and they'd finish getting her statement later. Then they focused on Ronald, as the team taking over work arrive tomorrow, meaning whatever they wanted to get out of Ronald had to be gotten quickly.

That night, Mark sat outside Ronald's cell, watching him. Ronald asked Mark for a kindness, offering to repay it if he did. Mark complied and played a son for Ronald to listen to. The next morning, Mark went to see Cassie, saying he wanted to try something with her. She said that needed to get the Ronald thing over with first, then they could try to start over. She didn't think Ronald would give them anything, but Mark didn't believe Ronald could help himself.

At the interrogation, Ronald gave them the name Kelli, whom he said was his special one. He also told of abandoning a cat in the basement as an experiment. When Mark grew tired of this, he asked where Mary was. Ronald asked to show them. They got Ronald out of the jail and he led them to a garage, where they found Kelli's body covered by a sheet. When Mark asked again about Mary, Ronald tried to make it a game, so Mark put him back in the car to take him back to jail.

On their way back, they were hit by another car, sending their car spinning through the air. Mark was knocked unconscious by the impact. While he was out, two men got out of the truck that had hit them. Jenny killed one while the other took Ronald and shot Jenny. After Ronald and the man escaped, Mark was taken away on a stretcher.[7] 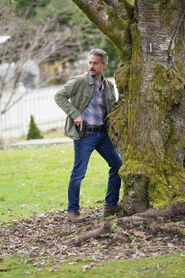 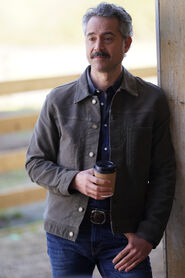