Let It Be Him

Merrilee was upset when her husband came home late one evening. She'd kept his dinner warm for him, but expressed desire for him to touch her more, like a husband should touch a wife. He brushed off her desires as menopause. When he left the house again at 2:30 AM, she was upset, saying there were other troopers and he didn't have to go.[1]

Merrilee was working at her store when Ronald came in, though he introduced himself at Michell. He flirted with her and invited her to a taxi dance, saying he wouldn't charge her for the dance. Merrilee went to the dance, but after seeing Ronald dancing with another woman, she tried to leave. He followed her and convinced her to stay. They danced and she worried that he would have expectations of her, but he said he didn't, that he just liked to dance.

Merrilee came home after the dance. Her husband saw her and asked where she'd been. She simply said she'd been out dancing and went to bed.[2]

Merrilee woke the next morning to her husband hovering over her with a hammer in his hand. He immediately started telling her how he was going to turn over a new leaf and make some changes. All he had to do was wrap up a few things first. Later that day, Merrilee was at her shop when Ronald came in to see her. He told her he was going to be away for a while and didn't want her to worry about him. When she told him she was married and that meant something to her, meaning their dance would have to be a one-time thing, he said he would always remember it and knew she would do. He then gave her a kiss and left. As he left, Cassie walked in. She questioned Merrilee about her husband, asking if he'd been acting different lately. Cassie then said he might have something to do with the girls' disappearance. Merrilee was upset by this and told Cassie she had it wrong, but said that Rick was acting exactly as he always did, as he was a creature of habit and did everything the same way every day.[3]

When Merrilee learned her husband was injured, she came to the hospital where she learned he’d been shot. She later sat down with Cassie, who told her the girls had identified Rick as their captor. Merrilee said she felt responsible as she and Rick spent their days not noticing each other.

While sitting by Rick’s bedside, Merrilee got a call from Ronald expressing his condolences. She told him they didn’t know if he’d recover yet or not.

Later, the police came to the Legarski home and searched every inch for evidence.

Back at the hospital, Merrilee told the nurse that Rick liked Frank Sinatra, so they played some of his music in Rick’s room in the hopes he would help his recovery. While Merrilee waited by his bedside, Jenny came to see her and they got into a bit of a confrontation over Rick’s involvement in Cody’s death. Merrilee apologized and said she didn’t know her husband as well as she thought she did. The next night, Merrilee slept in a chair by Rick’s bed. Suddenly, he opened his eyes.[4]

Merrilee tried speaking to her husband, but got no response though his eyes remained open. After the nurse left, Legarski asked Merrilee who had shot him. Dr. Wang came in and examined him as well, but said it was likely he wasn't fully awake despite his eyes being open. However, Legarski then gripped his fingers and said they were going to need a bigger boat. Soon after that, Penelope Denesuk, Legarski's lawyer, arrived and introduced herself.

Merrilee got a call from Ronald, who wanted her to meet him. She said she couldn't and hung up.

Later, Merrilee waited while they brought Grace in to identify Legarski as the man who killed the fisherman. After this happened, she got another call from Ronald and agreed to let him come over.

Ronald came to her house. They ended up hugging and kissing before she pushed him back and said she couldn't do that. She then left to make them tea while he went upstairs to use the bathroom. While he was upstairs, Merrilee answered a knock on the door to find Jenny and Cassie there. They showed her a sketch of Ronald and told her he was her husband's accomplice. She told them he was in the house right then. They drew their guns and came inside the house.[5]

By the time Jenny and Cassie got upstairs, Ronald was gone. Tubb and the rest of the police force arrived soon after to search the house and surrounding area. They also questioned Merrilee, who told them everything she knew, but also knew that what he'd told her, including his name, was probably fake.

After speaking to the police, Merrilee went to the hospital and told her husband that the police believed she was involved and wanted her to make another statement. Penelope advised her to get her own lawyer and not speak to the police or the FBI. Merrilee took that advise and asked for a lawyer, so they sent Cassie in to speak with her instead of a cop. Merrilee spoke with her and said she really didn't believe her husband was faking the memory loss. Cassie then gave her a picture of Erik and said they needed to help keep him alive.

Merrilee took the picture and went to visit her husband again. She asked him if he remembered his previous stance on morality. The man she married cared about humanity, which is why he became a state trooper. She needed him to remember that so he could help them save Erik, as his accomplice had Erik and might kill him. He might also kill Merrilee. Legarski simply said he was sorry.[6]

Merrilee grew increasingly suspicious of her husband, though he maintained that he didn't remember anything. She found him apologizing in his sleep when she came into the room one day. Penelope called her out into the hallway to ask if she was on her husband's side or not. She was planning a defense that involved treatment for Legarski because of his memory loss and would eventually lead to freedom. Merrilee said she was on her own side.

When Penelope came back to ask if he remembered anything about Ronald, saying they could use anything he knew as leverage to get them to go lighter on him, Merrilee told her husband she knew he was lying, but he refused to say anything and simply kept talking about baseball.

Finally, Merrilee came back to his room one evening and said she knew what kind of mood he was in or what was going on in his head based on the songs he would sing around the house. She told him she knew he was planning to kill her that night she woke up with him hovering over her. He'd already killed Cody and the fisherman and she was next. She had a hard time wrapping her mind around the fact that he could go free after killing two people. She then took a hammer out of her bag and started hitting him with it. Once he was dead, she sat down on his hospital bed and waited as hospital personnel came in. Soon afterward, she was arrested and led out of the hospital with her husband's blood still on her face.

She is married to Rick Legarski. They have grown children together.[7] After a confrontation in which Merrilee asked Rick to touch her more, Rick asked her if she was going to leave him. She said she’d be less lonely if she did.[8]

She makes quilts and sells them at her own store: Merrilee's Quilt Craft. 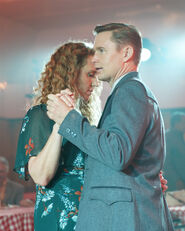