Walter Tubb is the sheriff of Lewis & Clark County.

When Danielle and Grace Sullivan disappeared on their way to visit Danielle's boyfriend, Justin, Justin's mom, Jenny, tried to report them missing to Walter. He told her, and then Cassie, that the girls couldn't be officially considered missing yet because it hadn't been 48 hours. Cassie suggested that he could send out officers to look for the girls or check truck stops.[1]

Tubb later received a visit from Jenny, who wanted him to talk about Legarski, as she and Cassie believed he was involved in the girls' and Cody's disappearance. When pushed, Tubb had Legarski brought in to talk to him. When Legarski got there, he tried to paint the whole situation as society having a thing against cops and every cop having a target on their back. Tubb eventually let him leave.

Tubb later had Cassie and Jenny in his office after Jenny had a confrontation with a trucker with a gun. He suggested he could arrest Jenny, but Jenny said she was just defending herself. He told them not to expect any more favors from his department and let them go.[2]

Tubb met with Joanie and Robert Sullivan, the girls' parents. He told them he was doing everything he could to find their daughters. When Joanie asked about offering a reward, he told them a tip line that paid for information had been set up, but nothing useful had come in yet. He promised them he'd investigate every lead personally.

Tubb later got a call from Jenny, telling him about the Bureau of Land Management shed, where Legarski had been spending a lot of time in the last few days, which had an underground space ideal for concealing the girls. After she reminded him that the longer they waited, the less likely they were to find the girls alive, he agreed to meet them out there. When they arrived, they found no girls, just Legarski eating a sandwich. Tubb talked to Legarski, who said that Cassie had a thing against cops and had made Tubb a pawn in her fight against Legarski personally.

Tubb took Cassie and Jenny back to his office, where they said Legarski must have found their tracker and used it to cover his tracks. Elena Sosa of the Montana Highway Patrol then came in and asked Tubb what he was going to do about the women who put one of her guys in danger. He then moved to arrest both of them for criminal stalking. Jenny then accepted full responsibility, saving Cassie from being arrested.[3]

Tubb later went to the All-In when Cassie confronted Legarski there. He arrived just after she’d shot Legarski. He discovered that Legarski was still alive and got him medical attention. Outside, Cassie told Tubb that there was another captor, a trucker, according to the girls. He took Cassie’s gun and said he and his guys would take over from there.

He brought Cassie into his office to question her about the shooting. He again said that his guys would be taking over the investigation and was troubled that Cassie shot Legarski when Legarski never pointed his gun at her. She maintained that it was her or him.

Tubb and his men went to the Legarski house and ripped the house apart looking for evidence.[4]

When Legarski woke up, Tubb came back to the hospital to talk to him. When Jenny and Cassie showed up, he reminded him that he'd told them to stay away. He also told them that Grace offered to help them find the dead fisherman.

When Jerrie came to Jenny and Cassie fearing for her safety after getting a message from the trucker taped to her door, Tubb said he could have a patrol car pass every hour, but he was understaffed and that's the best he could do. As it was, the FBI would be taking over the case when they arrived.

At the hospital, Penelope Denesuk warned Tubb not to try speaking to Legarski alone as she was his representation.

Tubb then lead a team out into the woods to find the fisherman's body with Grace's help. With her help, they found a body in a silver spring and pulled it out. Grace was then able to identify it as the fisherman Legarski had shot.

Next, Grace went to the hospital with Tubb to identify Legarski as their captor and the man who had shot the fisherman.[5]

After Ronald escaped the Legarski house before Jenny and Cassie could get him, Tubb and his team came in to search the house and question Merrilee. She told him everything she knew. He also said he would need to question Jenny and Cassie as witnesses.

Tubb later told Cassie and Jenny that Merrilee was getting a lawyer and the search of the house turned up nothing. He also told them Legarski was asking for a polygraph to prove he really didn't remember. When a paper deliverer disappeared and they believed Legarski's accomplice had taken him, Tubb's men took a list of the kid's customers and began going door-to-door to find him.[6]

Tubb had no success going door-to-door, but Cassie ended up at Ronald's house unexpectedly. When she realized who he was, she contacted Tubb and he called in his deputies to surround Ronald's house in an attempt to get him to give himself up. He deputized Cassie and Jenny, agreeing to take responsibility for them. Tubb first tried to get Ronald to give himself up by speaking to him through a megaphone, but when that didn't work, they breached the front door. It was booby-trapped and the deputy who used the battering ram was shot with a shotgun. Tubb called for a medic as the others entered the house, then entered himself. He warned that there might be other traps in the house as they started searching for Ronald and Erik. When Cassie smelled gas and noticed some boxes that were giving off sparks, Tubb immediately started an evacuation. Just as Jenny, the last person out, exited, the house exploded behind her. Jenny brought a body out with her she believed to be Erik, but further examination showed that it was Helen, who had been dead for some time. They figured Ronald had been tipped off and escaped before their arrival. Tubb also told the others that Ted Maynard had been last seen on his way to the Pergman house to visit Helen.

Tubb got into a helicopter with Sosa to look for Ronald, whom they believe to be driving Maynard's Tesla. When Cassie found the car headed for the interstate, Tubb had the helicopter taken to their location. He warned Casie to stay back until backup arrived. They went through their options to stop the car as Cassie continued her pursuit. When they learned that Ronald was not in the car, that he'd put Maynard's body in the driver's seat and turned on autopilot, Sosa mentioned she'd read about them stopping a car in a similar situation by getting in front of it and stopping, triggering the autopilot to stop the car. Cassie was able to get in front of the car, but swerving to avoid debris put her in their lane facing the wrong direction. The car stopped just shy of a head-on collision. Tubb then landed in the helicopter as Cassie and Jenny checked on Erik. After Erik was taken away to be reunited with his mom, Tubb told Cassie and Jenny that he'd just learned that Merrilee killed Legarski.[7]

Jenny and Cassie worked closely with Tubb on the case of Alan Hedley, whose wife had hired them to investigate his suspected infidelity, after they found he was into a much more dangerous situation. Later, while discussing the case and shooting cans with Jenny, Tubb tried to talk her into giving up Dewell & Hoyt and running to replace him as sheriff. She said Dewell & Hoyt was Cody's legacy and he would have wanted her to take over. Despite this, he was able to secure a warrant for her related to her case. After a confrontation, Tubb questioned Bruce Stone about his involvement in the theft of some thoroughbred horse semen, which his son-in-law was attempting to sell, nearly getting himself killed in the process.[8]

Tubb came to Lochsa when Jenny called him to tell him about the Kleinsassers. He arrested Sheriff Wagy and Al Gregor, but because it was out of district, he had to hand them over to the state. He also tried again to convince Jenny to try to become sheriff once he retired. Before she could answer, he got a call from Helena and told Jenny there was a break in the Pergman case.

They returned to Helena, where Ronald had been arrested and was being held. Ronald convinced them to let him lead them to Mary. While they drove there, Jenny got a call reporting that Scarlet, one of Ronald's supposed victims, had spent time in a facility for the criminally insane, confirming Jenny's suspicion that something was off with her. When they arrived at a garage, Tubb stayed outside and guarded the outside while they went in. Once they realized it was pointless, they went to return to the police station. On the way back, the car containing Ronald, Cassie, and Mark was hit by a truck, flipping them and forcing Tubb and Jenny to stop quickly to avoid hitting them. Two men then got out of the truck and started firing at them, hitting Tubb in the shoulder. After a long confrontation, during which Jenny killed one of the men and the other took Ronald and left after shooting Jenny, Tubb's wound was bandaged and his arm put in a sling. Tubb then called Denise to tell her about Jenny.[9]

He is the sheriff of Lewis & Clark County. 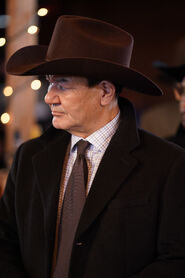 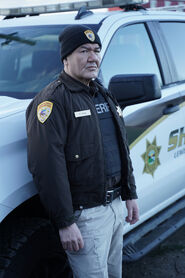